HomeBlogAccess and BarriersThe more things change, the more they stay the same. 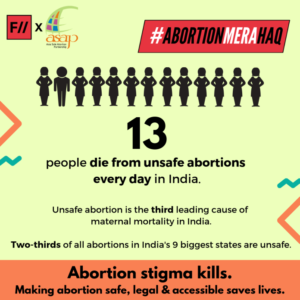 Many of us greeted the news with cautious optimism when we heard that yesterday the Union Cabinet, chaired by the Prime Minister had approved the Medical Termination of Pregnancy (Amendment) Bill, 2020 to amend the Medical Termination of Pregnancy Act, 1971. The Bill will be introduced in the ensuing session of the Parliament. But on reading the details of the amendments proposed one is forced to wonder if this is just fussing around over minor details while continuing to ignore the larger issues of women’s autonomy and agency?

For these amendments to truly bring about wide ranging change we must remember one crucial thing about true change—it happens only with a shift in power. Until the archaic patriarchal notions of the need to criminalize various sexual and reproductive aspects of our lives (such as Section 377 in the Indian Penal Code) are done away with, any legislation like the MTP Act which is mainly meant to protect the doctors and not the women involved, is not likely to result in genuine change. For example, on closer review of the features of the proposed amendments that have been reported in the government press release there are certain areas of concern that we need
to address:

How do we define humanitarian and social grounds? Who gets to decide that?

If that were truly the intent of the proposed amendments to expand access of women to safe abortion services then the Bombay High Court as well as the Supreme Court Bench that deliberated on the Right to Privacy have already articulated a far broader interpretation:

“Recognising a woman’s prerogative to make decisions about her health and body, the bench ruled that “there is no doubt that a woman’s right to make reproductive choices is also a dimension of ‘personal liberty’ as guaranteed under Article 21. It is important to recognise that reproductive choices can be exercised to procreate as well as to abstain from procreating.” The judgment further states that “a woman’s freedom of choice whether to bear a child or abort her pregnancy are areas which fall in the realm of privacy.”

In a suo motu PIL concerning the deplorable condition of a female prison inmate, the Bombay High Court categorically stated in 2016 that a “woman alone should have the right to control her body, fertility and motherhood choices.” The high court also addressed the status of the legitimate state interest in protecting “potential life.” It stated that since pregnancy takes place within a woman’s body and profoundly affects her health, mental well-being and life, an unborn foetus cannot be put on a higher pedestal than the rights of a living woman.” Thus, the Bombay High Court and Supreme Court have both emphasised women’s autonomy to take informed decision regarding their own bodies.
The phrasing “to strengthen access to comprehensive abortion care, under strict conditions” hints at the fact that the underlying attitude is that abortions need to be controlled somehow. One has to question what makes an abortion such a different concern compared to say neurosurgery or cardiac surgery? There are laws which already provide for criminal punishments for grievous injury which would encompass any such surgery without consent or done with negligence or criminal intent.
Why can those similar laws not apply to abortions also and the decision of providing the service be left to the person who is pregnant and their doctor? If we can trust doctors with the training to do brain surgery, which can have the potential for irreversible damage while an abortion is the removal of a feus that one could potential make again or adopt a child or become a parent through surrogacy then why is an abortion law needed when a
neurosurgery law isn’t?

How come the woman’s fetus and the choices she makes about continuing to host it inside
her body or not warrant an Act of parliament is the question we need to ask?
And if we believe that somehow it does, then we need to ask is this amended MTP Act is something that is going to protect a woman’s right to control her body and her life? If not then, well, the more things change the more they remain the same! What we would need from a good law is that it should ensure no women is turned away or forced into an unsafe abortion or into continuing a pregnancy that is unwanted. These current proposed amendments do not address that nor do they in any way hold the government and the public health sector facilities accountable for ensuring any of this. They do not provide for better access to Medical Abortion Pills, or for making sure that all government hospitals are providing the full range of abortion services including second trimester abortions and without any coercion for contraception.

The reason why women end up going to the informal or formal private sector is because of the lack of sensitive and confidential good quality services in the public sector combined with the coercion for contraception. The amendments would be truly powerful if they could address that also.
We already have a rather large collection of laws meant to ‘empower’ and ‘protect’ women from a vast range on injustices and inequalities, whether they actually result in any change in women’s lived realities or not. This includes the Female Infanticide Prevention Act, Dowry Prohibition Act, Prohibition of Child Marriage, Protection of Women from Domestic Violence Act, Maternity Benefits Act among others.

The amendments also do not make any mention of the clause allowing failure of contraception as a valid reason for any woman, married or unmarried.
Given that the Indian Penal Code, absorbed mostly un-changed from the British penal Code of 1860, still criminalizes miscarriage, perhaps we need to look at first de-criminalizing it from there and then creating a law which protects women’s right to their body by providing and ensuring that they have access to free and good quality safe abortion services (surgical and medical) at all public health sector facilities, without any coercion for contraception.

That is the law we really need.