As we get ready for the Youth Advocacy Institute, I am reposting this blog by Neha Naqvi and Prabha Nagaraja of TARSHI. Prabha and Neha talk about the need to improve access to information on sex and sexuality in order to empower young people to take charge of their bodies and their lives. Do not miss the great video TARSHI shared with us.

“Sex-ed is important because some people seem to think that kissing can lead to babies, and sex without condoms is absolutely safe” – Vasundara Jain, 18 years, India (Young Voices Speak, TARSHI)

Sexual health and wellbeing are integral components of physical and emotional wellbeing, and in turn are essential to the fulfillment of the right to life and dignity. To enjoy complete wellbeing, the active participation of women and young people in programmes and policies that directly affect their lives and futures is critical. Yet, our reality remains that competing socio-political claims complicated by morality’s narrow take on both sexuality and the exercising of reproductive choice have largely interfered with the States’ commitment to the realization of sexual and reproductive rights in many parts of the world, including in the South Asia region.

In countries of this region, deep-seated social practices that cut across class, caste and culture tend to colour notions of fertility and motherhood with ‘an overriding sense of duty’. This serves only to control and contain the exercising of reproductive choices, including access to safe abortion by women. Paradoxically, the premium placed on the birth of the ‘boy child’ can complicate matters by increasing the demand for (sex-selective) abortion, but that is another discussion altogether.

TARSHI (Talking About Reproductive and Sexual Health Issues) is a New Delhi, India based non-profit organisation that ran a telephone helpline on sexuality, sexual and reproductive health related issues from 1996 to 2009. People from all walks of life accessed this service that provided information, counselling and referrals to callers. Gleaning from the more than 60,000 calls received in a span of 13 years, TARSHI’s helpline identified key areas in which women were found to be lacking both information and access to services. TARSHI recorded more telephone calls from men than it did from women, which reflects potentially unequal access and the far-reaching impact of years of stigma, repression and taboo. Changes that occur during puberty, basic anatomical information, facts about both conception and contraception, issues of gender identity, body image, and questions about HIV prevention formed the majority of questions that warranted immediate addressing (for more please visit www.tarshi.net).

The helpline experience reinforced the fact that misinformation owes its debt to poor and uneven access to accurate facts, to fear- based messaging and to the lack of comprehensive sexuality education in schools. Incomplete and inaccurate information on sexual and reproductive health related issues also cut across class, education, gender and age lines. As a consequence of widespread ignorance and in some cases the deliberate suppression of information, women in varying capacities across the country are often found silently nursing a variety of misconceptions about sexuality and reproductive health issues which often have a grave impact on their health and wellbeing. Their questions tend to go unanswered; the information available to them is often inaccurate, fragmented, fear based or value laden.

Survey results reflect similar realities – early and unplanned pregnancies, vulnerability to HIV and other STIs, RTIs, violence, abuse, and discrimination based on gender or sexual expression are issues that continue to be inadequately addressed. According to the National Family Health Survey III (2005-6), 44.5% of women in India still get married by the age of 18 years (28.1% in urban areas and 52.5% in rural areas). Further, 16% of the women interviewed within the age of 15 to 19 years were already mothers or pregnant at the time of the NFHS survey. There is clearly a large unmet need for contraceptive information, and access to a whole range of comprehensive reproductive and sexual health services.

The ability to make informed choices in the context of sexual and reproductive health depends largely on an individual’s access to accurate information. However, because decisions about sexuality are based on more than information alone, values and emotions play a crucial role in determining choice. Part of the problem is that there is not enough done in the way of equipping women and young people with the necessary concepts, tools, and affirmative language to be able to make responsible and safer choices, and to be able to exercise autonomy over one’s own body. 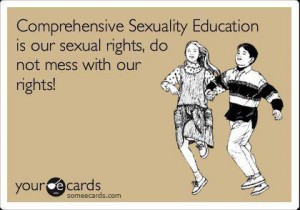 Questioning proscribed, narrow notions of morality; culture; and tradition simultaneously is just as critical. A comprehensive approach to sexuality education that is gender-sensitive, age-specific and free from negative value judgments is essential to girls and women leading lives free of fear, disease and violence. In building value for sexuality and the sex positive approach to pleasure and protection, sexuality and choice, it is critical that we are inclusive, and start early enough to give these concepts, ideals and methodologies the time they needs to be internalized and reflected in the lives of those that experience it.

For sexuality education to be effective, the concerns and needs expressed by women and young people have to find a place at the very centre of existing policies and emerging programmes. What we need, is support for autonomy and sexual agency; to build value for honing the ability to access, promote and take responsibility for one’s own sexual, reproductive health and well-being. A rights-based approach that encourages greater participation and employs progressive pedagogical approaches would go a long way in imparting effective and comprehensive sexuality education to all, which is one of the most important prerequisites for the attainment of universal sexual and reproductive health and wellbeing.

Neha Naqvi is the Program Associate at TARSHI has been working on human rights, sexuality and gender justice issues for the last five years in both India and the United States.

Prabha Nagaraja is Director Programmes at TARSHI. Her areas of interest include sexuality education for young people and the sexual rights of people with disabilities.

TARSHI is one of the few Indian non-profits that works on sexuality using a broad rights-based approach. You can visit TARSHI at www.tarshi.net

All guest bloggers are experts in the field of reproductive rights invited by ASAP to write for this blog. If you are interested in contributing please write to us at discussions.asap@gmail.com