HomeBlogAccess and BarriersTurkey: Protesting Bans and Restrictions to Safe Abortions

The prohibition of induced abortions do not reduce the number of abortion, on the contrary, it leads to the increase in maternal mortality by increasing abortions under unhealthy/unsafe conditions.

– Final Conclusion of a WHO Meeting on Abortions in Ankara on June 6, 2012.

Until recently, abortion up to ten weeks of pregnancy was no controversy in Turkey. In fact, the country has a liberal law since 1983 that allows abortions on request for women older than 18. Abortions are also permitted to save the life of a woman, to preserve physical and mental health, in case of rape or incest, for socioeconomic reasons or in case of fetal impairment.

Turkey’s law also stands out for taking a rights-based approach. Sex-selection by any means is condemned and banned. Otherwise, contraception and abortion are made available as a reproductive right to all individuals, and families, particularly women.There is also no limit to the number of children every woman can have.

The one obvious pitfall to this law is the restriction of abortions after 10 weeks, though it is well-documented that safe abortions can be done all through the full 12 weeks of the first trimester, and in the second trimester. Still, unsafe first trimester abortions  are very low in Turkey, and contribute to only 2% of maternal deaths. Some of the recognized barriers to the access of safe abortions are the lack of facilities in rural areas, the lack of information, and high costs.

But earlier this year, abortions ran into a new impediment: religion. Prime Minister Recep Tayyip Erdogan caused furor when he claimed that abortion is murder, and threatened to restrict access to safe abortions. Erdogan endorsed anti-choice views of life beginning at conception, when he said, “you either kill a baby in the mother’s womb or you kill it after birth. There’s no difference.” 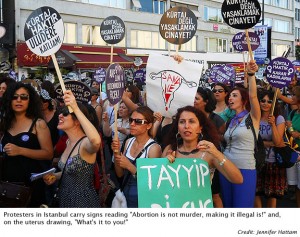 Turkish women responded gallantly, when they took to the streets in protest. Men also supported these rallies, and were spotted holding signs in support of their wives and daughters. Several citizens also questioned if the government was leaving behind women’s rights, as it prepared to strengthen its position in the Middle East.

Yet, the government only responded by banning the sale of Misoprostol, used for medical abortions, in mid-July this year. Mifepristone, the drug used in combination with misoprostol is already unavailable.

But a study published almost right afterwards shows that about 60% of obstetricians-gynecologists, and 5% of general practitioners have successfully been performing medical abortions since 1983 using misoprostol alone.

The study conducted in four Turkish provinces by Ankara based researchers Ayse Akin, Bahar G. Dogan, Sevkat B. Ozvaris, Sare Mihciokur notes the perspectives of 187 obstetricians-gynecologists (ob-gyns) and 268 general physicians on both medical and surgical abortions, and finds that over 90% of the obstetricians-gynecologists had performed surgical abortions, and at least 71% of them were in favor of medical abortions being widely available. Among the general practitioners, 13% had performed procedures, and 78% were in favor of medical abortions.

Medical abortions are particularly useful in Turkey, where abortions are not legal after 10 weeks. The study found that some physicians were concerned about the method and the possible risk of partial abortions. The authors suggested that this be covered in the basic training programs for physicians across the country and medical abortions be made more widely available.

ASAP spoke with Prof. Ayse Akin, the primary author of the paper, who stressed on the need to educate and inform policy makers, and members of the ministry on the need to keep abortions legal. She also participated in a meeting with the WHO on June 6th, and shared with their conclusions with ASAP.

The document recognizes abortion as a reproductive right, and unsafe abortion as a hazard to a woman’s health. It states very clearly that the prohibition of abortions, will only increase unsafe abortions, and calls for the government to make abortions universally available through health insurance schemes. Also, considering the advantages of medical abortions in the first 10 weeks of pregnancy, the document urges the government to make medical abortions accessible to all women.

One can only hope that the government will understand the consequences of restricting abortions, recognize the right to safe abortions, and review the law only to liberalize it further, by including medical abortions, and extending the legal period well beyond 10 weeks.

Please follow this blog for more from Prof. Ayse Akin later this month.

In the meantime, read a detailed review of the abortion laws in Turkey on our website