It’s hard to talk about feminism, and not mention Antigone. Both the princess and the play. 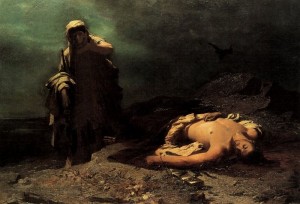 Here’s a quick summary of the story: Antigone was one of the two daughters of Oedipus. After his tragic death his sons fight for the throne of Thebes, and kill each other in battle. Creon who becomes king after this tragedy, decides that while one of them will be honoured as a hero, while the other one will be disgraced. His body is discarded outside the fort of Thebes. Antigone the grieving sister sees this as an act of discrimination, and decides that she mourns for her brothers equally. She defies the throne and her family, and buries her dead brother herself. When Creon later exhumes his body, she buries him again, and explains her act to the King. She is sentenced to death, and kills herself while waiting for her sentence to be carried out.

There are the bare bones of Sophocles’ brilliant work Antigone. It’s a story of the strength of character, civil disobedience and rights, which talks both about the rights of an individual, and the duty of a state. Antigone challenges the state as its citizen, and her family as a bereaved sister. She accepts death as the punishment for what she has done but refuses to apologize for her thinking.

It’s hard not to wonder if Antigone does not embody everything that feminism is about. If we could wake our inner Antigone isn’t there at least one right that we would like to stand up for.

We chose Antigone as our person of the month, because for for every abortion denied, we need an Antigone – A woman who will be unafraid to stand up against her family, her law and her society to ask for what is really her basic right. But we do know the obvious caveat: like Antigone in the play, she might be persecuted. 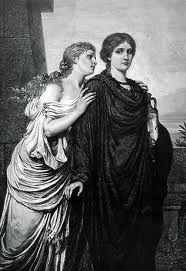 Sophocles addresses this fear as well in his brilliant story. Antigone’s sister Ismene chooses not to assist her sister for the fear or punishment. Later, she joins her and demands that she be punished as well for mirroring her sister’s thoughts. But Creon spares her because she did not participate in the actual burial.

In our real life, as our basic rights are taken away we often oscillate between our inner Ismenes and Antigones. While this is not a blog about what each individual might do, I do think a feminist society or group can achieve something by acting together. While a state might more easily be able to oppress an individual, it cannot silence a group that easily. So perhaps what we need is large civil disobedience movements were groups of citizens come together to express their displeasure against stringent laws and oppressive states. Not unlike the open letter recently published from Ireland! And perhaps as Creon sees the folly in his ways at the very end of the play, states will be forced to make policy changes, and grant women the right to control their bodies, their wombs and their lives.