“I have a dream.  I dream that when my granddaughters grow up, should they need an abortion, they will be able to access it with dignity and safety. ”

There was a brief moment of silence when Prof. Kamheang Chaturachinda, activist, abortion provider and founder of the International Women’s Health and Safe Abortion Congress concluded his welcome address with the above words. Behind him loomed an image of his 5-year old granddaughter. A minute later the room of delegates broke into applause.

To say the least, IWAC 2013 was a splendid success. Prof. Phil Darney presented the Allen Rosenfield oration, held in memory of the late Dean of the Mailman School of Public Health at Columbia University who dedicated his lifetime to the betterment of women’s health around the world. Plenary sessions addressed the history of abortion laws, the social barriers to safe abortion, medical abortion, education and training, and advocacy. The Symposia held in the afternoons gave advocacy organizations to present their findings. ASAP held a panel on The International Campaign For Women’s Right To Safe Abortion. (More on that will be coming your way very soon.)

But a theme that knit together all these talks was abortion stigma – stigma in the society, in the hospitals, at homes and even within ourselves. The speakers in their capacities as service providers, advocates, or both had seen several women who were forced to be ashamed of a basic medical procedure they had undergone for the want of better understanding around them. Irrespective of what the talk was, stigma cropped up either in the talk itself, or in the Q&A sessions that followed. 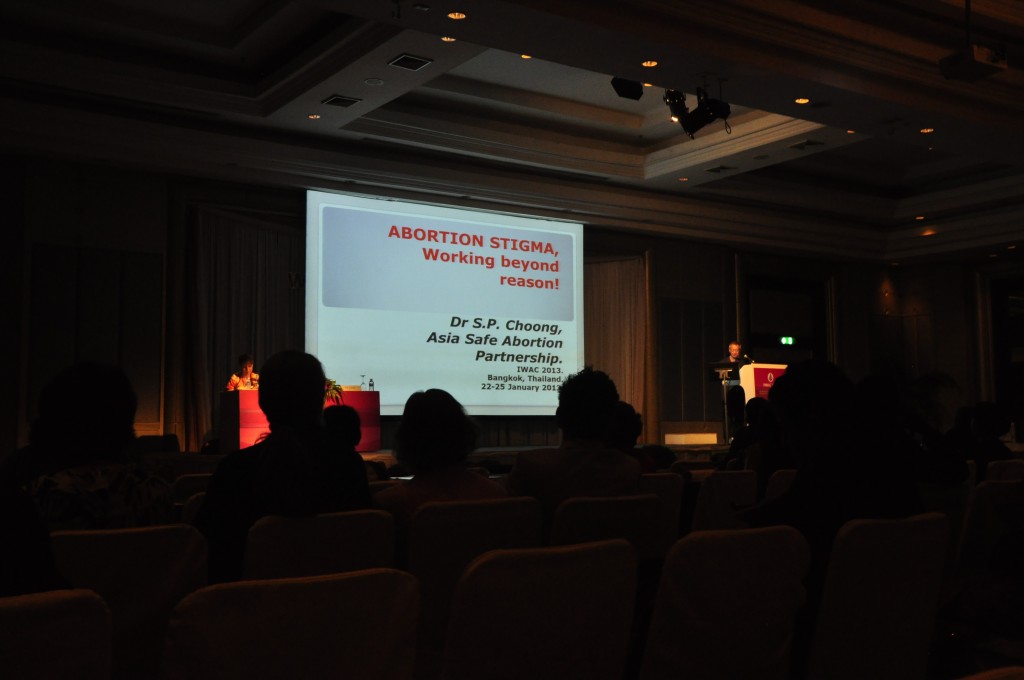 In a session that directly addressed this stigma Dr. SP Choong, ASAP Steering Committee Chair, said, “It is important to go to the roots of this stigma and ask ourselves where it comes from. It springs from this understanding that women are a lower form of life.”

Dr. Choong shared stories from his long experience as an abortion provider and activist. He was concerned that non-governmental organizations and hospitals are not free from stigma and suggested that we start remedying this social barrier “from home”. He appealed to the delegates to stop using euphemisms for abortions wherever possible, and to providers among the audience to talk about their profession more openly.

He shared his New Years Resolution with the room. “We often have short conversations with strangers when we are waiting at an airport for instance. I’ve decided to tell them that I am an abortion provider.” He asked every other provider to rethink their reservation and slowly “come out of the closet.”

He also expressed considerable concern over the anti-choice factions promoting themselves as “pro-women.” He said that this patronization could be battled by stigmatizing these groups for being anti-contraception, anti-education, anti-sex, anti-individual and anti-choice! He said he believed it is time for those doctors who are against abortion to ask themselves why they won’t provide, and time for those who provided abortions to stop being pestered for performing a basic medical procedure that offered thousands of women a key to a safer, more fulfilled life.

Dr. Choong’s opinions on stigma resonated at several other sessions at IWAC

It was fitting that Prof. Kamheang Chaturachinda used the word dignity in the concluding lines of his opening address. Dignity is a human right, but one that is hard to claim.  IWAC reminded us that it is time to stand up for that right to access abortion with dignity.