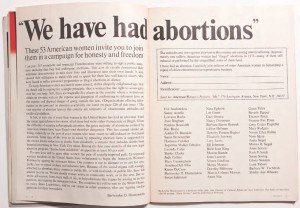 There’s a story behind every abortion. But many of these go unheard. Conservative views on life, and patriarchal ideas of motherhood have imbued women with a sense of guilt about their abortions, and forced them to remain silent about them. Even as prochoice voices unite to canvas for legalization of abortion, on the grounds of social justice and human rights, there is a dearth of actual narratives from women who have had abortions, found relief in them, and are willing to talk about them.

But there have been several attempts to plug this void. The recent death of Hollywood director Nora Ephron brought back to light her campaign for abortion. Along with Barbaralee Diamonstein, author of Open Secrets, and 51 other women, Nora Ephron signed a petition urging women to share their stories.

In the last decade several women have added their voice to the movement.  Organizations like Women on Web, and Exhale have created safe and nonjudgmental platforms for women to share their experiences, and support each other. Projects like I Had An Abortion and 1 in 3 project, allow women to use multimedia and social media tools to share their stories. There are several women who run blogs that offer support, and advice to other women. One that stands out is Samsara created by Inna Hudaya, a prochoice campaigner from Indonesia. Inna’s own traumatic experience, motivated her to step up and be a source of information for other young women.

All these abortion narratives are meant to help battle the shame and humiliation tied to abortions, dispel myths propagated by anti-choice groups, and help reduce unsafe abortions. They also aim to help governments see the need to legalize abortions, and to improve access to medical centers that provide these services. Activists also hope that these stories will make it impossible for international conventions on women’s health to ignore safe abortions for diplomatic reasons.

Above all, they are meant to create nonjudgmental communities, which help make abortions less isolating experiences. Several girls and women, whose families rejected them, or accused them of murder on religious grounds, have “come out” and addressed the need to stand up for each other, and for the cause. Most of them talk about how abortion was a solution to their troubles, and share how abortion changed their life for the better. One message comes through loud and clear: they do not regret their decisions.

I Had an Abortion Film from Jennifer Baumgardner on Vimeo.

But last week, the Feminist magazine Jezebel posed a question: should every woman feel the pressure to share her story, and does she betray feminism and other women around the world if she prefers to remain silent?

The author argues for her right to remain silent, and live with the secret for the same reason that she would not talk about her hemorrhoids. Which is fine from a personal point of view. But it cannot be denied that, coming out has its benefits. It allows men and women, governments and policy makers to look at abortion as an amoral issue. It also helps counter, the anti-choice movement, which is pretty vocal about its views.

But Hannah Betts’s editorial in the Guardian, offers a more likely caveat: some of these narratives tend to become self-indulgent, and draw attention away from the gravity of the larger issue. “The trouble with such sensationalising self-spectacle is that it can be used as a substitute for thought and debate.The personal is political, but the political does not have to be personal,” she writes. She also warns that these stories complement the prochoice campaigns, but cannot become a substitute for arguments based on evidence and offered on grounds of social justice and human rights.

Katie Stack, a young woman who revealed the story of her abortion on the MTV show, 16 and pregnant, and earned scathing comments from American TV host, Bill O’Reilly, offers a counter argument or perhaps even a solution in her article, Playing Offense Starts With You on Reality Check. She says she has always advised women to come out at least in private, in order for women to form a private space within which they can be free of judgment.

But as Ms. Stack points out, “While I am confident that our stories can make a difference, the burden cannot be on those of us who have had abortions alone.” It is important for policy makers, for care providers and for every prochoice campaigner to stand up and endorse abortions in some capacity, in order to fight the stigma, and to make it accessible to all women.

Amy Hagstrom Miller, a doctor who runs abortion care services wrote an editorial for the Minnesota Women’s Press, revealing her support for all women who need access to safe abortions. She said, “For me, providing abortion care with the dignity and respect women deserve is a calling.”

Coming out does help battle stigma, but is still easier to share these narratives in the developed world. Not to say that there are no anti-choice extremists who threaten the lives of care providers and activists. Dr. George Tiller, America’s most non-apologetic care provider, and prochoice champion was shot dead in 2009 for his unflinching support to women. In spite of these violent incidents, it remains more dangerous for women to reveal their stories in conservative countries where religious and patriarchal ideas have taken stronger root.

But these archives are online, and accessible to women all around the world. It may be long before women in developing countries add their voices to these narratives, but these stories could help them see that there is no shame in their abortions. It should be their choice, and it should be respected.