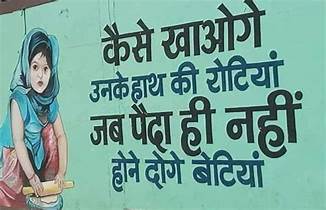 The authors have been involved in the safe abortion rights as well as sex determination issues in India as individuals and through their role and associations with various organizations, movements, campaigns, studies, publications and advocacy efforts, for over two decades. It has been their observation that many civil society groups and individuals working on these issues, as well as those involved in the on- the- ground implementation of related laws and policies and programmes, are often uninformed, mis- informed or confused since the nuanced inter-relation of the issues is usually not discussed or clarified, thus creating a false sense that the values around these two issues are in conflict, whereas if one goes deep enough into the ideology and perspectives that frame both the movements, it is a different story.

In this article the authors propose to provide a snapshot of the current landscape around both issues in order to unpack the historical perspectives as well as the trajectory of the politics and the influences that have shaped them. This weaves in an academic perspective as well as a view from the trenches.

Despite the MTP Act which was hailed as a progressive legal provision in 1971 and which does offer a wide range of conditions for providing an abortion, the ground reality related to awareness about the law and safe abortion access at healthcare facilities across the country is far from satisfactory even five decades later. The notion of an abortion still remains shrouded in stigma originating from patriarchal notions about women’s bodies, their reproductive lives and their gendered roles in society as child bearers and mothers within a cis-heteronormative, patriarchal (often endogamous, family-arranged) marriage.

The conversation and rhetoric around sex ratio became more visible and mainstreamed in the 1990s. Unfortunately this resulted in making the sex ratio a priority as a number to be ‘fixed’ and deflected attention from the core issue of gender-based discrimination which is the reason why daughters are unwanted and sons are desired in India. It ignored the centuries of oppression and inequality that has led to girls being seen as a social and economic liability to their natal families. It also encouraged quick fixes which did little to acknowledge or change the skewed power dynamics and injustices done to girls and women within the patriarchal socio-cultural context.

A poster by the government on raising awareness on ‘sex selection’ in India. Translation – How will you eat the food made by their hands, if you wont let them live?

Thus, the scramble to equalise the sex-ratio has not been accompanied by any significant measures to enhance gender equality and women’s economic and political empowerment. As a result, women are still shamed and made to feel guilty after giving birth to a girl child, and often subjected to violence and/or abandonment. Neglect and discrimination of girl children continues as well resulting in a higher death rate for the girl children below six years of age, even as the policy and programme efforts are on to ensure that more of them are being born.

In order to understand the conflation between abortion access and sex determination at the level of policy and practice, it is important to understand the trajectories of both these issues that profoundly impact women’s well-being and rights. Based on our personal involvement in the advocacy and campaigning work around safe abortion access as well as preventing discrimination based on sex-determination we attempt to juxtapose them in the context of emerging sociocultural-political changes in the country. We then discuss the possibility of disentangling them from each other in future campaigns, interventions and policy amendments.

The article is published as a journal by Family Planning Association of India (FPAI) and can be accessed here.

For any further comments or feedbacks on the article or on the issue of ‘sex determination and safe abortion’, you can write to us at coordinator@asap-asia.org