Quote Of The Month: John Irving 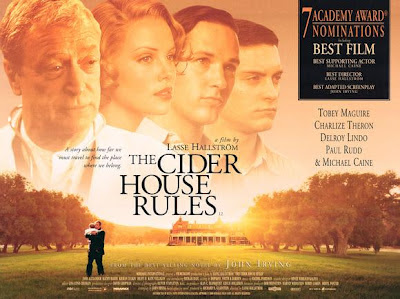 Have you watched or read the Cider House Rules? If not, buy yourself a copy now. If you are a firm believer in women’s rights to safe abortion you will cheer with prochoice doctor, Dr. Wilbur Larch. If you are not, you will be forced to rethink your stance on abortion.

But before I get into the story let me give credit where it is due. John Irving, the author and screenplay writer scripts the character of a very progressive doctor who performs safe abortion at a time when abortion is illegal in the USA. In conversations between Dr. Larch and his protege Homer Wells, Irving reiterates the need for abortion to be legalized, and for it to be considered a woman’s right and choice. For his amazing contribution, we are using two passages from his work in our monthly column “Quote Of The Month.”

The Cider House Rules tells the story of Homer Wells, who after being returned twice by foster parents, is brought up in an orphanage by Dr. Larch. They love each other as father and son. The doctor trains Homer to be his assistant, and Homer is happy to help except in cases of abortion. Homer believes that women who need abortion are selfish, and that if his own mother had had an abortion he would never have been born. And even if his life did not turn out to be a fairy tale, Homer likes being alive. Dr. Larch on the other hand strongly believes that people’s lives and characters take shape only after they are born, and that until then the woman has the right to decide whether or not she wants to be and can be a mother.

“Here is the trap you are in…. And it’s not my trap—I haven’t trapped you. Because abortions are illegal, women who need and want them have no choice in the matter, and you—because you know how to perform them—have no choice, either. What has been violated here is your freedom of choice, and every woman’s freedom of choice, too. If abortion was legal, a woman would have a choice—and so would you. You could feel free not to do it because someone else would. But the way it is, you’re trapped. Women are trapped. Women are victims, and so are you.”

The film follows cases Dr. Larch does, and arguments he has with Homer. Set in the pre-World War II times, when abortion was still illegal in the US, the film also explores how and why a doctor or any person trained to be perform safe abortion should consider it a moral obligation. The film speaks out against conscientious objection, particularly in restrictive regions where the woman might have nowhere else to go. Dr. Larch believe that Homer has an obligation to perform and assist in abortions even if he is not completely in support of them. He believes that Homer owes this to women who might otherwise be forced to risk their lives getting an unsafe abortion.

Through Dr. Larch, Irving also argues the characters of a society that would prevent abortion when women continue to be oppressed and subjected to violence. Through these arguments Dr. Larch criticizes the nation for doing so, and urges Homer as a trained provider to be unflinching in his duty towards oppressed women.

We are soon about to head into September, the perfect month for the movie which takes place in part in an Apple Orchard and Cider Farm. So buy a copy of the movie and meet one of the bravest fictional characters of all time.

Shweta Krishnan was the Communication and Networking Officer For the Asia Safe Abortion Partnership between June 2012 and March 2014. She is a feminist writer with a background in medicine, and has a strong commitment to promoting sexual and reproductive rights for all.
View all posts by Shweta Krishnan →
This entry was posted in Quote Of The Month and tagged cider house rules, legal abortion, safe abortion, women's rights. Bookmark the permalink.
Social media & sharing icons powered by UltimatelySocial
%d bloggers like this: