Denial of Abortion Services in Nepal

This was originally published on Kumari: A Feminist blog of our youth Champion Shreejana https://ceezana10.wordpress.com/2016/09/05/denial-of-abortion-service-in-nepal/

In 2002, abortion was legalized in Nepal and made widely available. Abortion is permitted up to 12 weeks gestation on request and up to 18 weeks in cases of rape, incest, and health risks to the woman or fetus. Abortion services were established at most government hospitals, private hospitals, and non-governmental organization clinics. The government of Nepal has taken important steps to include abortion as a component of women’s reproductive health services, enabling nearly 800,000 women to obtain safe, legal services between 2004 and 2014. The government has recently announced that abortion services will be made available free of cost in the public facilities but this will take time to implement.

We, Nepali women are living in most privilege country where abortion is safe and legal. The government of Nepal has respected the women decision to have choices and decisions on their own body. Nepali women make their own decision to terminate their unwanted pregnancy on her own consent. However in other countries like England, Wales or Scotland a woman must ask a doctor to make that decision to her. Similarly in the country where abortion law is restricted, Government takes decision for a woman whether she could or could not terminate her pregnancy. In most cases, women are denied of abortion services. This is the violation of Human Right.

For example, Northern Ireland where women are denied of abortion. In Ireland, abortion is all but outlawed. For decades, women have traveled to England to access abortion services. You can read an article where titled: Irish woman live-tweets journey for abortion from Ireland to England. Dr. Suchitra Dalvie talks about musings on women’s right to safe abortion questioning “Is it not a modern form of slavery to force a woman to have or continue a pregnancy she does not want? Should a woman’s reproductive function take priority over her own aspirations and desires and capacity to fulfill her own highest potential?

Coming back to Nepal and the situation of denying abortion to woman. People are shocked to know when I shared them that in unrestricted environment like Nepal, women are denied of abortion services. According to our National Demographic Health Survey (NDHS-2011), only 38 percent of women are aware that abortion is legal in Nepal. In addition, their knowledge of the specific circumstances under which abortion is legal is poor. For rural Nepali women, it is difficult to identify whether they are pregnant or not. Most of the women who reach health facilities for abortion service are of high gestation which means above 12 weeks. Most of our Government certified health facilities are authorized to provide comprehensive safe abortion service till 12 weeks of gestation.

High gestational age is the reason for denial of abortion as service providers hesitate to go against laws and they are not competent enough to terminate pregnancy of high gestation.
Most of the government health facilities are authorized to provide safe abortion services. However, women have been denied of the service due to absence of trained and skilled service providers. Most of the time lack of continuous supply of medical abortion in health facilities is another reason for denial. This has led women to buy unauthorized drugs over the counter which has led to complications among women. 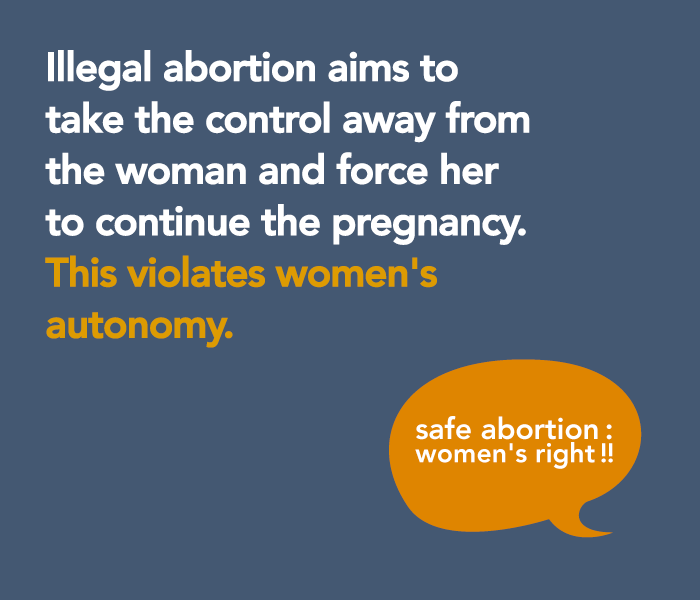 The study has also explained that denial of abortion service has forced women to continue with their pregnancies. Evidence has suggested that children fare best when they are wanted and loved. Similarly, rejection of abortion is leading women to access illegal abortion by self inducing unauthorized drugs and going for traditional methods which can result in incomplete abortion or complications.

This means even if the law is liberal, in certain condition we are forcing women to seek illegal and unsafe abortion. I believe that abortion should be accessible in any gestation age. However, the abortion procedure should be safe which does not keep women at the risk to lose their lives.

Shreejana Bhajracharya is oen of ASAP's Youth Champions in Nepal. A feminist and a strong human rights activist, Shreejana uses her creativity to conductive online and offline campaigns to promote SRHR in Nepal. She is very committed to the cause of promoting safe abortion rights.