Posted on 18 September, 2013 by Shweta Krishnan

With the UNESCAP 6th Asia Pacific Population Conference under way, we thought it might be great to review a few population terms.

Age-sex structure: The composition of a population as determined by the number or proportion of males and females in each age category. The age-sex structure of a population is the cumulative result of past trends in fertility, mortality, and migration. Information on age-sex composition is essential for the description and analysis of many other types of demographic data.

Birth Rate (or crude birth rate): The number of live births per 1,000 population in a given year. Not to be confused with the growth rate.

Carrying Capacity: The maximum sustainable size of a resident population of a given species in a supporting ecosystem. In human terms, carrying capacity refers to the number of individuals who can be supported in a given area within natural resource limits and without degrading the natural social, cultural and economic environment for present and future generations. Carrying capacity for any given area is not fixed, but can be altered by improved technology, and is usually negatively impacted by pressures which accompany a population increase.

Crude birth rate: The number of births in a given year divided by the total population in that year.

Demographic Transition: (1) The historical shift of birth and death rates from high to low levels in a population. The decline of mortality usually precedes the decline in fertility, thus resulting in rapid population growth during the transition period. (2) The transition from a traditional demographic regime in which fertility and mortality are high to a modern regime in which fertility and mortality are much lower. The transition from a so-called regime of “natural” fertility (not controlled by couples) towards a regime of “controlled” fertility may be referred to as a fertility transition. The period during which mortality decreases is referred to as an epidemiological transition or a health transition. It is accompanied by improved health, nutrition and organization of health services and a change in the causes of death, infectious diseases disappearing progressively in favor of chronic and degenerative diseases and accidents.

Doubling time: The number of years required for the population of an area to double its present size, given the current rate of population growth. Population doubling time is useful to demonstrate the long-term effect of a growth rate, but should not be used to project population size. Many more developed countries have very low growth rates and, as a result, the equation shows doubling times of hundreds or thousands of years. But these countries are not expected to ever double again. Most, in fact, likely have population declines in their future.

Ecological footprint: The land and water area that is required to support indefinitely the material standard of living of a given human population, using prevailing technology. The average American’s “ecological footprint” is about 12 acres, an area far greater than that taken up by one’s residence, work and school environment.

Fecundity: The physiological capacity of a woman to produce a child.

Fertility: (1) The actual reproductive performance of an individual, a couple, a group, or a population. See general fertility rate. (2) The term fertility is used instead of natality when births are put in relation with the number of women of fertile age. The fertility of a generation can be summarized by completed fertility and mean age at childbirth, whereas the total period fertility rate measures the fertility rate for the year.

Growth Rate: The number of persons added to (or subtracted from) a population in a year due to natural increase and net migration expressed as a percentage of the population at the beginning of the time period. (Also see World Bank Population Growth Rate information).

Life expectancy: The average number of additional years a person of a given age could expect to live if current mortality trends were to continue for the rest of that person’s life. Most commonly cited as life expectancy at birth. 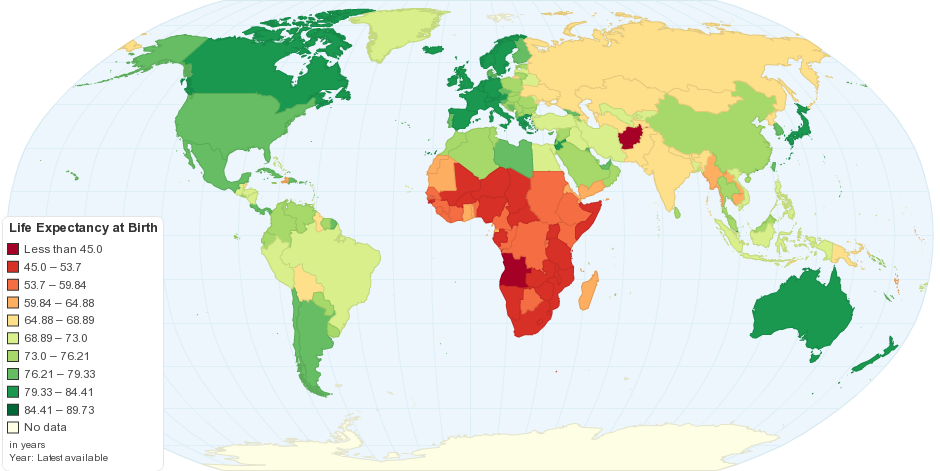 Life Expectancy at Birth: The average number of years a newborn infant would be expected to live if health and living conditions at the time of its birth remained the same throughout its life. (Also see World Bank Life Expectancy information).

Natural Increase (or Decrease): The surplus (or deficit) of births over deaths in a population in a year or given time period.

Population Momentum: The tendency for population growth to continue beyond the time that replacement-level fertility has been achieved because of the relatively high concentration of people in the childbearing years.

Population Projection: Computation of future changes in population numbers, given certain assumptions about future trends in the rates of fertility, mortality, and migration. Demographers often issue low, medium, and high projections of the same population, based on different assumptions of how these rates will change in the future.

Population Pyramid: A bar chart, arranged vertically, that shows the distribution of a population by age and sex. By convention, the younger ages are at the bottom, with males on the left and females on the right.

Population stabilization: Common term for zero population growth, in which the birth rate equals the death rate and in addition where net immigration equals net emigration so that the population does not increase or decrease over time. Usually used in the context of stabilizing increasing populations.

Rate: A ratio between events having occurred in a population during a year and the number of persons in a population in the middle of the year. When the events are observed over a period shorter or longer than a year their number is multiplied or divided by the appropriate factor so as to preserve the rate’s annual dimension. A rate may refer to all of the population (mortality rate, birth rate, etc), or to an age or age group (age-specific mortality rate, or age-specific fertility rate).

Rate of Natural Increase (or Decrease): The rate at which a population is increasing (or decreasing) in a given year due to a surplus (or deficit) of births over deaths, expressed as a percentage of the base population.

Replacement-Level Fertility: The level of fertility at which a couple has only enough children to replace themselves, or about two children per couple. [2.1 children per woman in the U.S.]

Stable population: A population in which the percentage of people at each age and sex category does not change over time (see population pyramid).

Stabilized population: Common term for stationary population, in which the birth rate equals the death rate and in addition where net immigration equals net emigration so that the population does not increase or decrease over time. Usually used in the context of stabilizing increasing populations, where the net population growth rate is zero.

Stationary population: A type of stable population in which the birth rate equals the death rate.

Sustainable population: a population of a given species that can be maintained indefinitely in a given area within natural resource limits, and without degrading supporting natural ecosystems as well as the social, cultural and economic environment of present and future generations. See carrying capacity.

Total Fertility Rate (TFR): (1) The average number of children that would be born alive to a woman (or group of women) during her lifetime if she were to pass through her childbearing years conforming to the age-specific fertility rates of a given year. This rate is sometimes stated as the number of children women are having today. Also see gross reproduction rate and net reproduction rate. (2) An estimate of the average number of children that would be born to each woman if the current age-specific birth rates remained constant. (2) A hypothetical estimate of completed fertility. It indicates how many births a woman would have by the end of her reproductive life, if, for all of her childbearing years, she was to experience the age-specific birth rates for that given year. (From U.S. Census Bureau Fertility of American Women: June 2000).

Zero population growth: A population in equilibrium, with a growth rate of zero, achieved when births plus immigration equal deaths plus emigration.

Shweta Krishnan was the Communication and Networking Officer For the Asia Safe Abortion Partnership between June 2012 and March 2014. She is a feminist writer with a background in medicine, and has a strong commitment to promoting sexual and reproductive rights for all.
View all posts by Shweta Krishnan →
This entry was posted in Access and Barriers, Other SRHR Fields and tagged APPC, population, UNESCAP. Bookmark the permalink.
Social media & sharing icons powered by UltimatelySocial
%d bloggers like this: